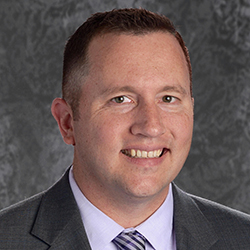 Travis Palangi was a featured speaker at K12 Facilities Forum ’18.

Travis oversees the Bond Issue and capital/facilities improvement program in the district, notably the recently passed $156 million dollar bond issue that included a new middle school and major renovations to other existing facilities within the district. He is also overseeing the design & construction of a new elementary school that was part of a previous Bond Issue. Travis also worked on the recently completed Olathe West High School, a new school designed around a flexible based learning environment.

Travis is a registered architect in Kansas and received a Bachelor of Architecture Degree from Kansas State University. He has solely focused on educational projects since graduating college. He served as a Consulting Project Architect on various Public K-12 School projects prior to accepting a position at Olathe Public Schools. He began his service at Olathe as their Design & Construction Manager in 2014. Travis has been a part of the design and construction of over 10 new schools and various other K-12 projects over his 18 year architecture career.

Travis is a member of the American Institute of Architects, the Olathe (KS) Chamber of Commerce, National Council of Architectural Registration Boards (NCARB) & a former Board of Director/ Vice President of the Down Syndrome Guild of Greater Kansas City.