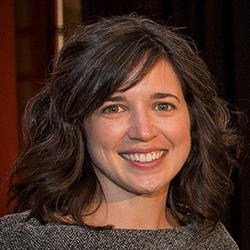 Anisa Heming was a featured speaker at K12 Facilities Forum ’18.

Read a summary of her session here.

As Director of the Center for Green Schools, Anisa provides strategic direction to USGBC’s work in schools and coordinates an organization-wide team to promote environmental sustainability, health and wellness, and environmental and sustainability literacy in school systems around the world. With a background in architecture, she began her work with USGBC in New Orleans, hired to assist with rebuilding the schools after Hurricanes Katrina and Rita. During her two years with the city’s Recovery School District, she established green design and construction standards, received an EPA grant to hire an indoor air quality manager for the schools, completed a public-private partnership to install solar PV on the roofs of schools, began a recycling pilot program, and laid the foundation for a district-wide energy management program.

After her time in New Orleans, she moved to Washington, DC and began the Green Schools Fellowship Program at the Center for Green Schools, placing and training sustainability directors in school districts and beginning the nation’s first network of school district sustainability staff. In 2014, she was named one of the Most Powerful Women in Sustainability by Green Building and Design Magazine. Anisa is a Little Rock native and holds a B.S. in Architecture from Washington University in St. Louis and an M.Arch. from the University of Washington in Seattle.